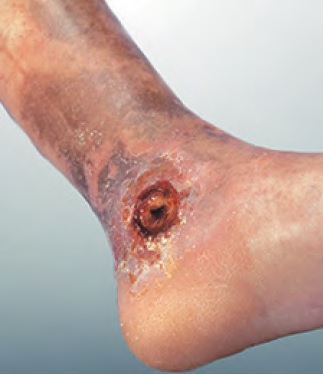 The drug candidate is administered as a gel (active peptide in a synthetic carrier), locally on the wound, two to three times per week by a nurse or in some cases by the patient. Ropocamptide is developed to be used in conjunction with regular dressing changes of the wound. Consequently, it is not necessary to change the principal medical practice in the wound management.

The peptide impacts several biological mechanisms of relevance in wound healing. The peptide attracts inflammatory cells, including monocytes and granulocytes. LL-37 modulates the inflammatory phase of wound healing through release of proteins and peptides that govern the inflammatory process (2). Keratinocytes (skin epithelial cells) are activated by LL-37, which in turn results in activation of growth factors in outer skin layer with a consequent cell migration. This is assumed to result in re-epithelization and closure of the wound (3).

Additionally, the production of vascular growth factors such as VEGF and the activation of endothelial cells in blood vessels are also important for the formation of new blood vessels that is observed after treatment with ropocamptide (4).

LL-37 has been explored in two randomized blinded clinical trials.

The first of these, a double-blind Phase IIa study (also referred to as a Phase I/IIa trial) included 34 patients with venous leg ulcers; a study where safety and tolerability were the primary endpoint (5). The patients were randomized in four different groups; three dose strengths of LL-37 and placebo. The trial also included secondary endpoints such a wound area size estimations and wound healing rate.

The two lower doses of LL-37 demonstrated high tolerability and were associated with a pronounced healing: the healing rate being almost six-fold higher than for the placebo group. Treatment for one month with the most efficacious dose resulted in a relative wound area reduction of 75 percent. In contrast, the highest dose was associated with local reactions (redness, pain and effusion). The highest dose did not produce a wound healing effect as compared with the placebo group but was not worse than placebo.

Data from Phase I/II clinical trial on ropocamptide in VLU. Efficacy is demonstrated for two doses of ropocamptide versus placebo.

The company has recently conducted a clinical Phase IIb trial (HEAL LL-37) of ropocamptide in Sweden and Poland, with conclusion of final report in 2021. The study included 144 patients with venous leg ulcers that were randomized into three groups (two doses of ropocamptide and placebo) and the treatment time of the trial was 13 weeks. The study showed that larger wounds (≥10cm2) healed significantly faster among patients treated with ropocamptide as compared with placebo. Patients treated with the most effective dose of ropocamptide, which is 0.5 mg/ml, demonstrated a more than three-fold higher frequency of completely healed wounds. At an aggregated level, where wounds of all sizes included in the study were analyzed, no significant differences can be noted at the whole group level between the three treatment groups.

Data from HEAL LL-37, a phase IIb clinical trial of ropocamptide in VLUs (per protocol). Efficacy in patients with large wounds (≥10 cm2)

In patients with larger wounds that were treated with 0.5 mg/ml ropocamptide, 28.1% achieved complete wound healing, in the group treated with 1.6 mg/ml ropocamptide 19.6%, whereas only 8.1% of patients in the placebo group showed complete healing. This difference is statistically significant (p <0.05) for the most effective dose group. When analyzing the proportion of patients who achieved 70% healing of their wounds, a statistically significant advantage could be demonstrated for both dose groups of ropocamptide compared to placebo (p<0.05). The mean reduction in wound size after discontinuation of treatment was 33.7% for patients treated with placebo, and 56.3% for patients treated with the most effective dose of ropocamptide (0.5 mg / ml). Regarding safety and tolerability, no serious adverse events have been noted that can be considered related to the trial drug.